With summer travel season in full swing, a new company is aiming to fill a longstanding hole in the coffee lover’s portable brewing kit: A convenient, packable instrument for precisely…

After four decades of being held in New York City, the head-to-head tournament-style Coffee Masters USA barista competition, produced by Allegra Occasions, is heading west this year to Los Angeles…

Last weekend the team from Tamper Tantrum took over the Taylor Street café in midtown Manhattan and packed it with over 100 coffee professionals to indicate their very first event in america. There are several coffee-based lecture series that currently take place around the world, however Tamper Tantrum is one of the longest running and well known, especially in Europe where it was started.

What started as a podcast by Colin Harmon (of Ireland’s 3FE) and Stephen Leighton (of UK’s Has Bean) in 2009 has turned into one of the world’s premier live coffee talk shows. During every event Colin and Stephen flip over their soapbox to other coffee industry professionals that give 20 minute talks about whatever is on their mind. After each speaker gets their say, a moderated conversation takes place allowing the audience to ask questions or discuss their own ideas on the topic.

The speaker line-up for New York’s event proved to be a balanced roster that included some very well-known business veterans alongside others who were providing their debut public discussions. But no matter their resume, everyone delivered spectacularly on a range of important topics that are often overlooked at coffee industry events which comprised diversity, worker power dynamics, moving beyond quality, healthy amounts of vision, cognitive bias, and Nick Cho.

In between the discussions happening in the loft upstairs, a Chemex-sponsored brew pub had popped up in the café below where a group of baristas served coffee from a range of roasters that included Counter Culture, Intelligentsia, Neat, Madcap, Irving Farm and Nobletree. The space was comfy, but lively and full of diverse viewpoints that surely had everyone’s brain working overtime.

Depending on the success of this inaugural US event, it probably won’t be the last Tamper Tantrum on this side of the pond. So in case you could not make the New York event, hold fast and maintain a look-out for future live events. Also, all of the lectures in NYC were filmed and will be released for the public to watch in the coming weeks and months. If you’re new to Tamper Tantrum, there’s an archive of great videos from previous events (like my recent favourite chat with former World Barista Champion, Stephen Morrissey), which you can watch for free at Tamper Tantrum.

Below is a short summary of each speaker and their talks that happened in New York. The grand finale of the day was a disagreement over the merits of java contests –dead or not dead–that you’ll have to wait for the movie to fully appreciate it and determine which side won.

Meister (@NotJustMeister) writes about java, debates others about coffee in her podcast Opposites Extract, also has been working with java in different capacities for nearly 16 years, most recently at Café Imports in Minneapolis. During her talk, Meister discussed how we define ambition in the coffee industry, asking what motivates us and what really makes us unique? After divulging that studies suggest that highly ambitious people aren’t happier and that less driven people are more content we ought to consider what kind of ambition is healthy in an industry that doesn’t always offer healthcare and support for the high stress involved. Instead of looking at ambition as hero’s decorations, it should align more with your personal mission. So she asks us as individuals to ascertain our motivation in this industry and use that as a personal yardstick to measure achievement.

Michelle Johnson (@meeshal) is an independent coffee professional who lives in Phoenix and works at a creative firm between coordinating community java events and writing from her perspective for a man of color working in the coffee industry, which has lots of diversity challenges. Meesh used the opportunity to talk candidly with the audience about her personal experience in addition to about the changes she hopes could be made quickly to produce a more inclusive business. She pointed out how advanced the industry is and how quickly it’s currently evolving, which should make it significantly easier to implement real change at the moment. From changing how we employ to how we evaluate staff. Why do we need diversity, she asks? New and fresh ideas, perspectives and invention to get started. We were different a year ago and we’ll be different again next year. Meanwhile, we should work to end stereotyping, implicit prejudice, tokenism and covert racism. She also argues for diversity in hiring staff–pointing out that when the industry hires based only on experience, it perpetuates the white male majority within the business. Instead, hire for character and potential.

Jenn Chen (@thejennchen) is a java marketer based in San Francisco, who utilizes well-crafted communication to get a firm’s message out to their audience online. She organizes java events around San Francisco with the Bay Area Coffee Community and has helped lead a significant discussion about diversity and sexism in the coffee market. At the event she talked about power dynamics in the coffee sector and how it affects the livelihood of those working in it. After defining what is meant by power dynamics, Jenn shared several anonymous stories about real situations that employees in the coffee industry must deal with constantly and could often be resolved with better dynamics among coworkers, employer & employee, customer & barista and peer to peer. She followed up the examples with hints which may have prevented them.

Colleen Anunu (@anunumous) is the Sr.. Supervisor of Coffee Supply for Fair Trade USA and specializes in effect evaluation and market access strategies for coffee producers and roasters, highlighting shared value, gender equity and farmer-first community growth. Colleen wanted to talk with the audience about going beyond quality and challenging coffee professionals to also consider other things that matter in the industry. How do we trace java better and ensure that coffee is profitable in the long run? She claimed that we don’t know the real price of coffee or the real investment needed to really produce higher quality and further, that we often don’t understand what the greater green costs or our relationships are in fact doing for farmers. We should quit mythologizing our business so we can make real change for growers. Colleen finished with some shared principles & values she hopes the industry will commit to–actionable transparency, credible accountability and honest emotional equity.

Matt Perger (@mattperger) has won a whole lot of coffee competitions (even when he has not ) and created a growing coffee knowledge empire named Barista Hustle where he shares advice focused on his mission of consistency, accuracy and deliciousness.  This isn’t Matt’s first Tamper Tantrum and this time around he spoke about our shortcomings as human beings because of bias. He outlined very types of bias and how it affects us. Starting with cognitive bias, i.e. the bandwagon effect. Anchoring bias, or placing too much burden on one specific detail. Saliency bias. Illusory Correlation. Congruency Bias. Confirmation Bias. Choice supportive bias, and so on. All of this was intended to show us that we don’t know what we don’t understand and we’re sitting beneath Mount Stupid. Matt then went on to discuss the need for real, balanced criticism to help the industry grow. Less back patting and more real talk. He suggested that we stop giving empty compliments and instead help each other do better. We can choose to disagree, but we could never learn if we don’t understand.

Nick Cho (@nickcho) is the creator of Murky Coffee, which opened in 2002 in Washington D.C. and emerged as one of the pioneering third-wave cafes on the east shore. Five years ago, Nick and his wife Trish Rothgeb co-founded Wrecking Ball Coffee Roasters in San Francisco and Nick has continued to be a pioneer in the industry through his work on many organization boards, committees, and twitter. Nick’s talk began by asking the audience what the biggest problem is in specialty coffee. After pointing out all of the successes that the industry has had, such as specialty coffee being trendy as ever and that the business growth likely ensures that it is not going anywhere soon. So what’s the biggest problem–Climate change? What could be bigger? Nick believes the lack of institutionalized education in coffee is the issue. We don’t have checks and balances. All the knowledge we have about specialty coffee can be educated in a couple of weeks. Nick believes we’re past the point of relying on blogs and forums and Twitter for knowledge and we want something more concrete. Next, he moves on to explore the information gap in coffee businesses, stating that if you’re a highly skilled expert in green buying or roasting or brewing, you need to have knowledge from the other regions to fully understand how to do it nicely. He argues that an orchestra doesn’t have three conductors, thus a quality focused coffee company shouldn’t . Could coffee level programs create better coffee workers? Maybe. Most of us want to get better, individually and collectively. But what does that really mean?

++
You can check out all of the event photos on Facebook and read the dwell tweets on Twitter. 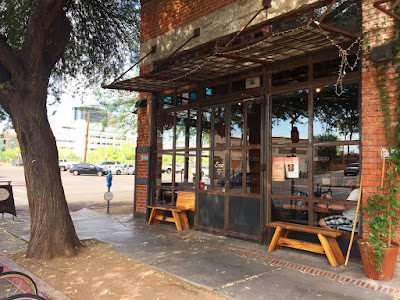 Component of the Fill in the Coffee Map Collection

The burst of humidity every year around June makes me pine for drier areas while I enjoy the eastern side of the USA. This 's probably one reason I took a fancy that is fast . In summer time, its landscapes and agreeable climate made it a respite from the constant moisture that’s the East Coast. Read “

Take the next step in your pursuit of the perfect cup with the Hamilton Beach 40792 Espresso & Cappuccino Maker. Inspired by European cafés, this espresso maker helps you indulge in rich-tasting espresso, cappuccino and latte without sacrificing convenience. Unlike other high-tech machines that can be difficult to operate and cost thousands, the Espresso & Cappuccino Maker has patented Slide and Lock technology that makes achieving café-quality results practically effortless. You simply choose either finely ground espresso or a pod, and use the selector dial for espresso and steam functions.…